The following is reprinted from an article by Preston Lewis which appeared in the December 1987 TASH newsletter under the title shown below. I have had it posted on my bulletin board at work for over 20 years. Every time it read it, I'm reminded of why I became an occupational therapist.

A CASE FOR TEACHING FUNCTIONAL SKILLS

My Older Brother Daryl.
18-years old, (30-40IQ)
Been in school 12 years.
Never been served in any setting other than elementary school.
He has a number of years of “individual instruction.”
He has learned to do a lot of things!
Daryl can now do lots of things he couldn’t do before!

He can put 100 pegs in a board in less than 10 minutes while in his seat with 95% accuracy.
But, he can’t put quarters into vending machines.
Upon command he can “touch” his nose, shoulder, leg, foot, hair, ear. He’s still working on wrist, ankle, hips.
But he can’t blow his nose when needed.
He can now do a 12-piece Big Bird puzzle with 100% accuracy and color an Easter bunny and stay within the lines!
He prefers music, but was never taught how to use a radio or record player.
He can now fold primary paper in halves and even quarters.
But he can’t fold his clothes.
He can sort blocks by color; up to 10 different colors!
But he can’t sort clothes; whites from colors for washing.
He can roll Play Dough and make wonderful snakes!
But he can’t roll bread dough and cut out biscuits.
He can string beads in alternating colors and match it to a pattern on a DLM card!
But he can’t lace his shoes.
He can sign his ABC’s and tell me the names of all the letters of the alphabet when presented on a card in upper case with 80% accuracy.
But he can’t tell the men’s room from the ladies’ room when we go to McDonalds.
He can be told it’s cloudy/rainy and take a black felt marker and put it on the day of the week on an enlarged calendar (with assistance).
But he still goes out in the rain without a raincoat or hat.
He can identify with 100% accuracy 100 different Peabody Picture Cards by pointing!
But he can’t order a hamburger by pointing to a picture or gesturing.
He can walk a balance bean frontwards, sideways, and backwards!
But he can’t walk up the steps of bleachers unassisted in the gym when we go to a basketball game.
He can count to 100 by rote memory!
But he doesn’t know how many dollars to pay the waitress for a $2.59 McDonald’s special.
He can put the cube in the box, under the box, beside the box, and behind the  box.
But he can’t find the trash bin in McDonald’s and empty the trash in it.
He can sit in a circle with appropriate behavior and sign songs and play Duck, Duck, Goose.”
But nobody else in his neighborhood his age seems to want to do that.
I guess he’s just not ready yet.

Email ThisBlogThis!Share to TwitterShare to FacebookShare to Pinterest
Labels: Autism

Here are some fun games that can be enjoyed indoors or outside. If you prefer outdoors, use sidewalk chalk instead of tape.
Bean Bag Toss- Tape different shapes on the floor and give the child several beanbags. Tell him to toss a bag on the square first, then on the circle, then on the triangle. If you have various colors, say “toss the blue bag inside the blue circle, or toss the blue beanbag inside the red shape." You can then ask him, "which shape is red?" so that he has an opportunity to name it. If you want to keep score, give higher points for the smaller shapes. 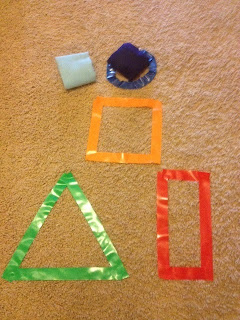 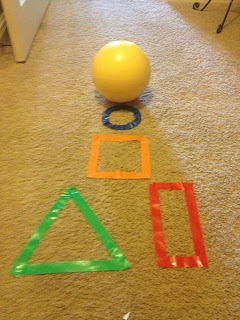 Dear Readers, If you have found my blog to be helpful, please "like" my Facebook page and follow my blog...I'm trying to get my book published and this would be a great help! Thanks :)
Posted by Anne Zachry at 1:40 PM No comments: