Teaching Kids with Autism and Other Disabilities to Type

When teaching students with disabilities to type, I've found that it's best if I teach them to type words or phrases that are meaningful to the student. For example, I worked with a student this past school year who was not one bit interested in typing, but he absolutely loved theraputty. He had been practicing typing his name for several weeks, but I couldn't get him interested in the task. Solution: I taught him to type "I want putty." 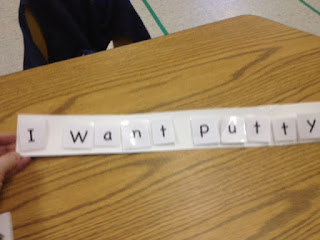 I started by printing out the letters I- w-a-n-t -p-u-t-t-y on card stock. I cut out the individual letters and laminated them. Then I made the sentence using the letter squares and cut out a rectangular strip of poster board long enough to hold all of the letters. I used Velcro to individually attach each letter in order to the poster board. 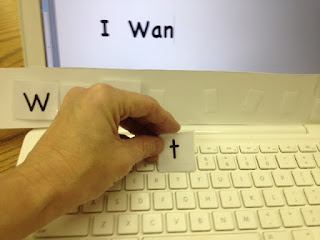 I removed all of the letters and place the sentence strip just below the computer screen (see above).  While the student sat in front of the keyboard, I held each letter close to it's corresponding key and instructed him to press that key saying, "type I." Once the student correctly typed the letter, I placed that letter in the correct spot on the sentence strip, and then I praised him and pointed to the letter on the screen and said "Great job, you typed an I!"  I continued with the task until he had typed the full sentence. We then read the sentence aloud together. After that, he had an opportunity to play with the putty as a reward for a job well done! 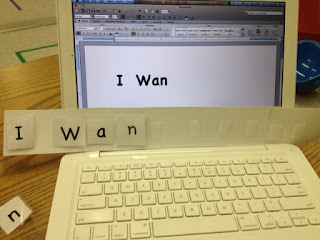 My goal is that I can eventually place the sentence strip in front of the screen and the student will type the sentence independently. It may take some time, but he'll get there! 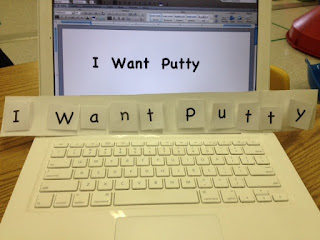 Dear Readers, If you have found my blog to be helpful, please "like" my Facebook page and follow my blog...I'm trying to get my book published and this would be a great help! Thanks :)
Posted by Anne Zachry at 2:17 PM