OCCUPATIONAL THERAPY: It's the Little Things that Make Life BIG!

This month's posts will feature special stories of how occupational therapy made a positive difference in someone’s life! The stories will come from therapists as well as patients. So let’s get started! 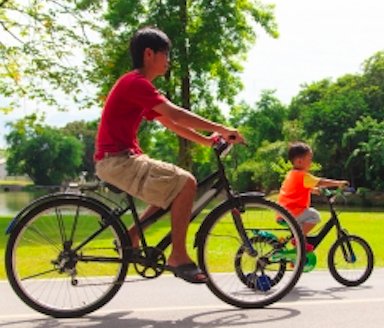 Photo Credit: Naypong @ freedigitalphotos.net
Jason was a nonverbal 7-year old boy with a diagnosis of Autism Spectrum Disorder. He also had sensory processing challenges! He didn’t know where his body was in space and craved constant deep pressure input. When I evaluated him, I asked his mother about her goals for Jason. She shared that she would like Jason to be able to brush his teeth, put on his shirt in the morning, and improve his attention to task. When I asked her what she thought Jason wanted to be able to do, she said, “Oh, that’s easy, he wants to learn how to ride his bike!”

Every afternoon, weather permitting, Jason’s little brother would ride his bicycle up and down their long driveway. Without fail, Jason would attempt to join him. Jason could get on the bike independently, but all attempts to teach him to ride the bike (using training wheels) had failed.

After several OT sessions, it became clear that Jason’s sensory and language challenges were part of the problem.  Jason’s mother would tell him to “push the pedals,” but Jason would just stare at her confused. So, during Jason’s sensory play, we started working on the concept of push. With Jason positioned on his back, feet in the air, I would put my hand on Jason’s foot and say “push!”  No response.

One day while browsing at the dollar store (my favorite therapy shop!), I spotted several squeaky dog toys.  I had an idea!

During Jason’s next session, I held the toy against his foot and told him to “make the toy squeak.”  As soon as he pushed against the toy to make it squeak, I said, “Yes, you are pushing!”  By the end of the session, he was pushing his foot against my hand on request.

The next session I brought my duct tape (another wonderful OT tool!). With Jason’s mother’s permission, I taped the squeaky toys onto the bike pedals. The rest is history! The squeaky toys helped Jason grasp the concept of “push,” and they are no longer needed. Now Jason loves to ride bikes with his brother after school! No more watching on the sidelines!