OCCUPATIONAL THERAPY: It's the Little Things that Make Life BIG!

As an occupational therapist that will have been practicing for 24 years next month, I am privileged to have spent most of those years working in pediatrics.  In fact, when I first heard about the topic of this series of posts, my initial thought was that it would be much easier for me to write about the many ways in which I have benefitted from interacting with the children with whom I have worked.  As my perspective has shifted many times over the years as a result of connections I have made with others in my role as an O.T., one of the most powerful lessons I have learned also happens to involve a situation in which the thinking of others changed because of something that happened during an O.T. intervention.

About midway through my years as a school-based O.T., the kindergarten teacher of a child on my caseload approached me in the hallway one day after school.  She told me that the student, whom I will call “Carol,” had refused to follow directions given by the teacher in class earlier that day.  Evidently, the teacher had been calling on students one-by-by to go up to the front of the classroom and count to 20, as part of her assessment of their progress in math skills.  When Carol’s name was called, the child did not get up from her seat.  Even with prompting and encouragement from the teacher, Carol didn’t comply.  The teacher said she hoped to be able to document that the skill had been mastered by this bright little girl the following day and had emailed Carol’s mother to let her know what had happened.  Later that night, I got an email from Carol’s mom asking me if I had any ideas about what was going on or what could be done to remedy the situation.

As an O.T., I know that there are many dimensions of a person that go into his or her ability to perform a skill or to complete an activity – from vision and hearing, to focus and cognition, to motor skills and more.  Two things I learned early in my career to consider, especially when a child refuses to even try to do something, are motivation and emotion, and, with that in mind, I sent an email back to Carol’s mother asking her to bring Carol to school a little early the next day.

The following morning, after talking to the teacher to let her know my plan, I took Carol into the classroom and told her that I was going to do some “morning stretches” that she could do with me if she wanted.  After she had imitated my movements for a few minutes, I asked her what had happened the day before when she had been asked to count for the class.  “I felt way too hot,” she told me. “I wanted to do it, but I was just so hot.”

Realizing that motivation wasn’t a factor in her decision not to comply but that emotion likely was, I decided to shift gears.  I picked up a couple of beanbags from a bin in the corner and told Carol that I wanted to see if she and I could catch and throw together.  I said “Now!” as I released one beanbag to toss it to her, and she threw the second beanbag to me at the same time.  It took us a few minutes to get the rhythm just right, but after that we were able to keep things going without dropping either beanbag for several minutes at a time.  Once I could tell she was really focused, I said, “Let’s count each time we catch one and see how high we can get!” Without any help from me, Carol started counting and made it up to 24 before a beanbag fell to the ground.

“OK,” I said, “but this time, stand at the front of the classroom while we do it so you can practice counting there.”  After she had moved into position, we got started again, and she counted to 27 that time.  “Let’s try something a little silly,” I said. “Let’s do the same thing again, but this time let’s just pretend that we’re throwing the beanbags to each other.”  She willingly agreed, and that time we made it to 31, at which point I saw the teaching coming through the door. When I pantomimed dropping a beanbag, Carol looked up and saw her teacher and said, “Guess what!  I’m not too hot to count anymore!”

Later that day, the teacher reported that Carol had counted to 20 in front of the class without hesitation, and then she leaned a little closer to me and said, “I didn’t think about why she wasn’t getting up to count yesterday.  It seems like she was just unsure of herself and so she was afraid or nervous.  Next time I run into a situation like that, I will think about the emotions that go into that kind of thing.”  In the weeks that followed, the teacher told that story to Carol’s parents, to the principal, and to the other teachers at the school; each time I happened to hear her talking about what had happened, I heard her end the tale with, “Who’d have ever thought that courage could be found through pretending to catch beanbags?” 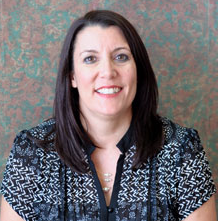 Stephanie is an alumnus of Washington University in St. Louis, where she graduated with a degree in Occupational Therapy in 1991. As a school-based OT for almost two decades, Stephanie specializes in pediatrics and holds a certification as an Assistive Technology Professional (ATP) through the Rehab Engineering & Assistive Technology Society of North America (RESNA). Her professional interests include providing intervention services for individuals with disabilities and working with their families and other professionals in the field to promote evidence-based practice and to decrease barriers for people through design, selection, and implementation of A.T. materials and strategies. Please visit her website @ https://stephanielancasterot.wordpress.com.